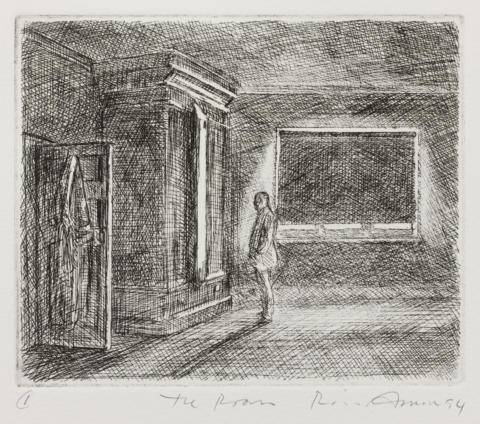 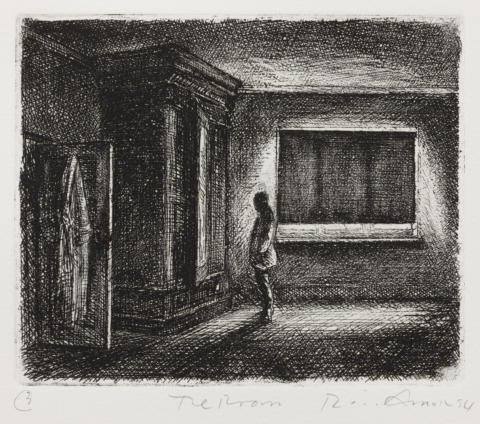 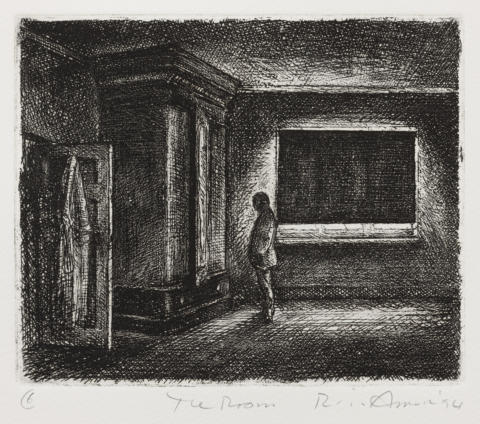 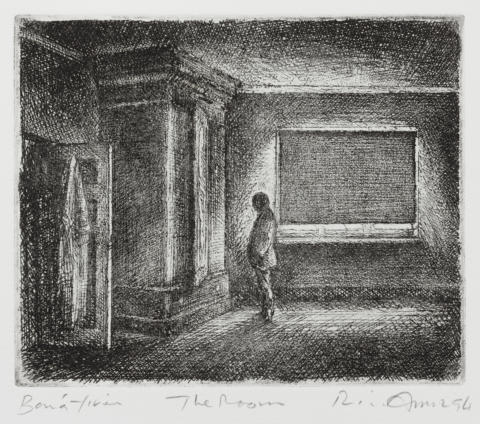 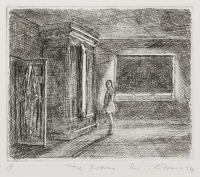 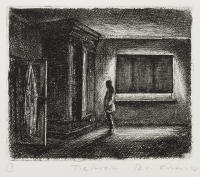 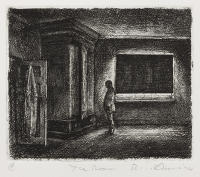 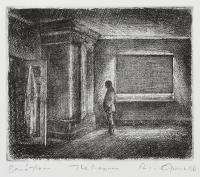 Etching. A man stands in left profile, with his hands in his pockets, in a room that is empty but for a large wardrobe at the left, its door ajar. The man faces it, unmoving. Behind him is a window, with its blind drawn but with daylight seeping through. Another human presence is suggested by the garment hanging on the open door at left. Most areas of the composition are covered with a dense mesh of etched cross-hatching, with the effects of light having been obtained through burnishing.

The light area on the ceiling has been extended and the two vertical beams seen through the blind are now thinner. The dark shadow below the window has been lightened through burnishing.

The wardrobe has been burnished lightly, as has the floor. The gap created by the open wardrobe door appears now as a strong, dark vertical.

The plate has been extensively burnished. The blind is again a flat area, with the window divisions no longer visible through it. There are three variant impressions of this state.

The room depicted here is the bedroom in Amor’s newly purchased and freshly painted house in the Melbourne suburb of Alphington, not long after he and his partner, the artist Meg Williams, had moved in, in April 1994.

The presence of the Hitchcockian figure establishes immediately an atmosphere of mystery, at the heart of which is an exploration of the function of light in revealing subtle degrees of darkness and in evoking a perplexing mood. From the technical point of view, Amor has approached this etching almost as though it were a mezzotint, with the burnisher being used as a tool for creating and manipulating light. The main changes in detail through the progression of seven states focused on the source of illumination: the window. The blank blind of the first state was transformed in the second into a blind that allowed the tripartite structure of the window to show through. By the final state, the blind had returned to its original blankness. This starkness contributes to the sense of anonymity, of unsettling emptiness, in the image.

E.086 served as the model for a painting, also made in 1994, titled The room (memory) (Catalano 2001). This work, however, shows the room without a human presence. Catalano (2001) sees the painting as having a ‘massive poetic charge’ – as offering a clear example of Amor’s powers of suggestion and evocation. This is also true of the etching.

E.086 is the first print that Amor made and printed in his Alphington studio.