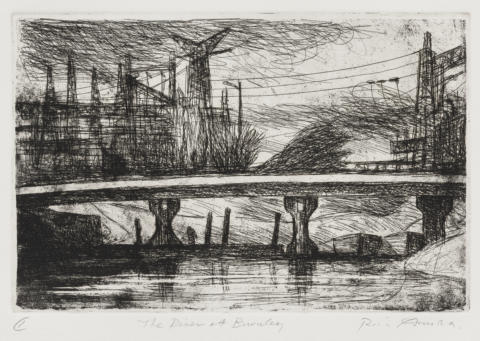 Etching. Spanning a river is a low, slightly arching bridge supported by three pillars. Behind it are electricity pylons and cables, as well as industrial cranes, and, in the centre, two large bare shrubs. The composition is complete in this the first state.

The black rectangle below the bridge, at the left, and the immediately surrounding area have been lightly burnished. There are three variant impressions of this state.

This etching is based on a pencil drawing, dated 5 April 1991, made on site, by the Yarra River at Burnley, an industrial inner suburb of Melbourne; however, the print is oriented in the reverse direction.

The subject of E.042 was essentially complete in the first state. Amor re-etched the plate in the second state, to create a stronger image, and added drypoint to the bridge’s pillars so as to introduce a greater tonal balance between the upper and lower halves of the composition. In the third and final state, he fine-tuned the tonal balance by burnishing an area at the lower left of the image.