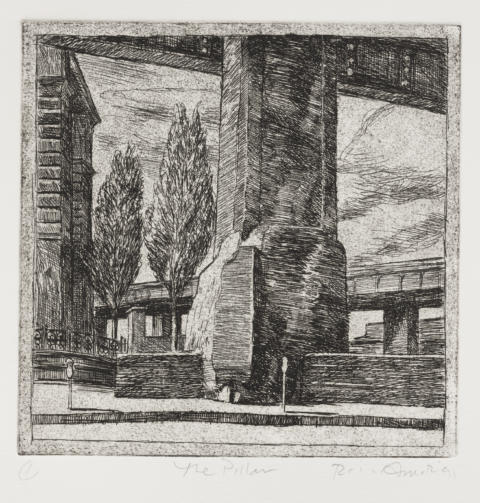 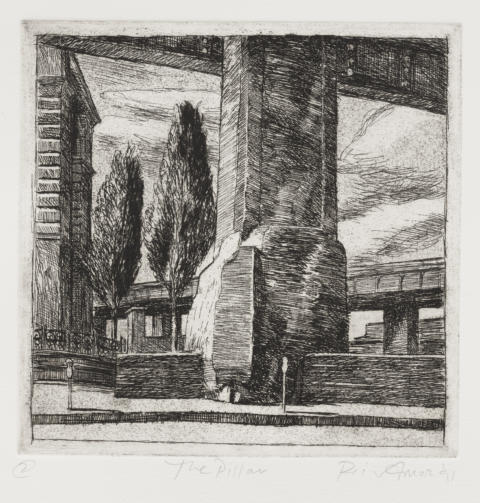 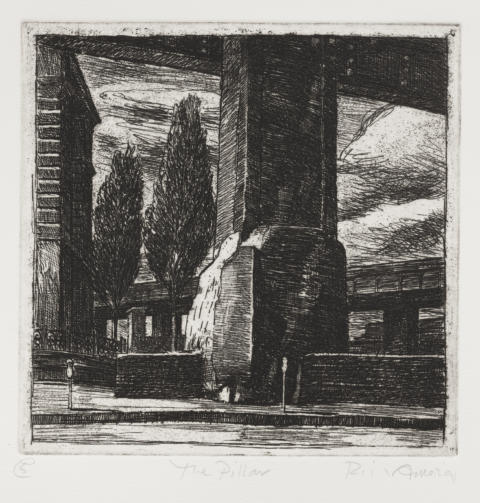 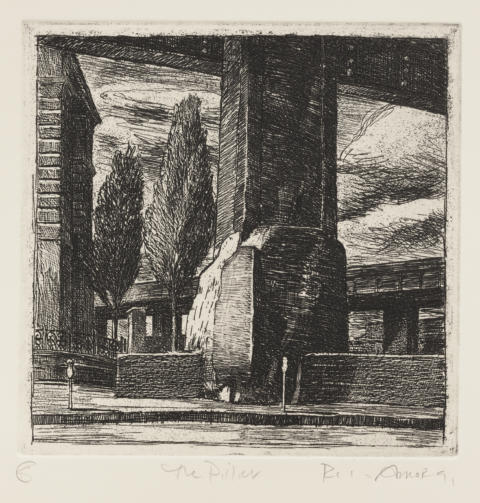 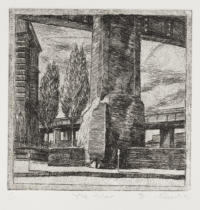 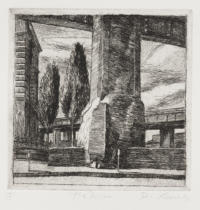 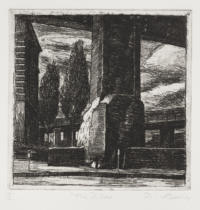 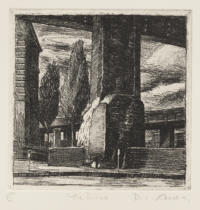 Etching over sandpaper ground. A view under a railway bridge supported by a large central concrete pillar. At the far left is a fragment of a nineteenth-century building. To the right of the building are two cypresses, and in the middle distance is an elevated roadway.

Drypoint shadows have been added to the tree foliage and to the upper area of the rustication of the building at left. The sandpaper tone has been burnished around the framing line, in the areas of cloud, and in the irregular area at the base of the pillar. There are three variant impressions of this state.

The plate has been re-etched and all the lines are now slightly thicker and darker. Etched hatching covers large areas of the plate, including the sky, the pillar, the footpath and the road. There are three variant impressions of this state.

The plate has been burnished in many places so as to give the image a greater sense of volume and space and to enhance the overall tonal balance. The areas of burnishing include the vertical strip of masonry on the building at the far left, the irregularly shaped protruding section at the base of the pillar, the overpass pillar in the right middle distance, and the buildings behind it. There are three variant impressions of this state.

Catalogue Number
E.044
Title and Date
The pillar 1991
Description of Featured Image
A view under a railway bridge supported by a large central concrete pillar. At the far left is a fragment of a nineteenth-century building. To the right of the building are two cypresses, and in the middle distance is an elevated roadway. Although inscribed ‘8’, this is actually an impression of the fourth and final state of this print.
Where Made
Dunmoochin, Cottles Bridge
Medium Category and Technique
Intaglio Print: Etching over sandpaper ground, drypoint and burnishing on copper
Support
Wove paper. Identified papers: White Arches paper with watermark: ‘ARCHES / FRANCE’ with infinity symbol; cream BFK Rives paper with watermark: ‘BFK RIVES / FRANCE’ with infinity symbol.
Dimensions
Image size: 214 x 216 mm
Matrix size: 217 x 218 mm
Artist’s Record Number
RAE.40
Printer(s) and Workshop(s)
All impressions printed by Rick Amor in his Dunmoochin studio, Cottles Bridge.
Summary Edition Information
Four states. Nominal edition of ten, but only one impression printed and numbered, 1991.
Exhibitions
Niagara Galleries & NETS Victoria 1993–94: Niagara Galleries & NETS Victoria, Melbourne, Rick Amor & the Graphic Arts, Victorian and Tasmanian tour, 1993–94, no. 37.
Collections
State Library of Victoria, Melbourne: eight state impressions, numbered 1 through 8.
National Gallery of Australia, Canberra: ‘out of series’ impression, printed in colours from two runs of the plate through the press, on cream wove paper (2007.714).
University of Tasmania, Hobart: AP.
Comment

The pillar depicted here is one of the columns supporting the railway bridge near the intersection of Flinders and Spencer Streets in the city of Melbourne, an area that has undergone major infrastructure and building development in the decades since the early 1990s. E.044 is based on a photograph taken by the artist and is the earliest of several closely related paintings and etchings. These fall into two types: the first represented by this print, and the second by an etching made in the following year, which shows the same pillar but with the orientation of the image reversed (see cat. no. E.064). Both etchings have their painted variants.

In the first three states of this print, Amor worked on modelling the image in dark tones with drypoint and etching, while in the final state he used the burnishing tool to calibrate the light areas of the image in order to enhance its tonal balance and to give it a greater sense of volume and space. However, he continued experimenting with dark tone to the end, as the National Gallery of Australia’s ‘out of series’ impression (E.044.IV.c) demonstrates.

A drawing in colour pastels on blue paper, dated 28 May 1991, was made after the etching; both works are oriented in the same direction.