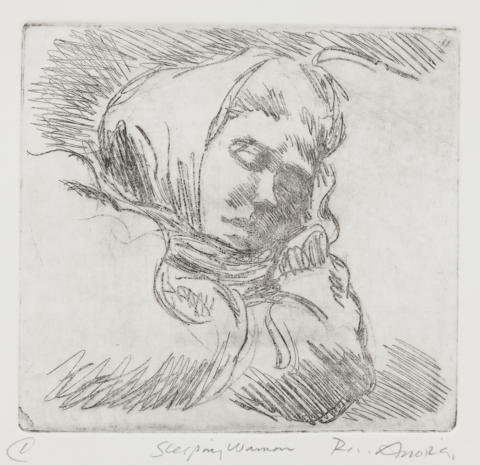 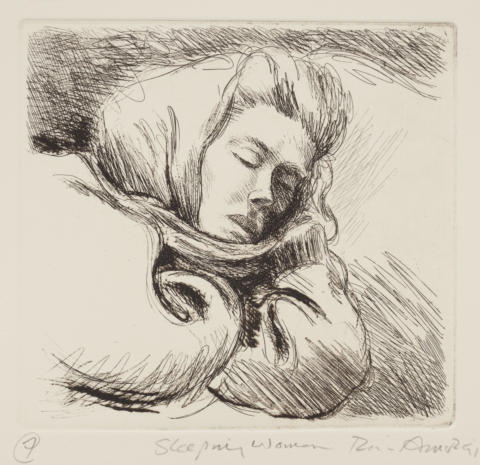 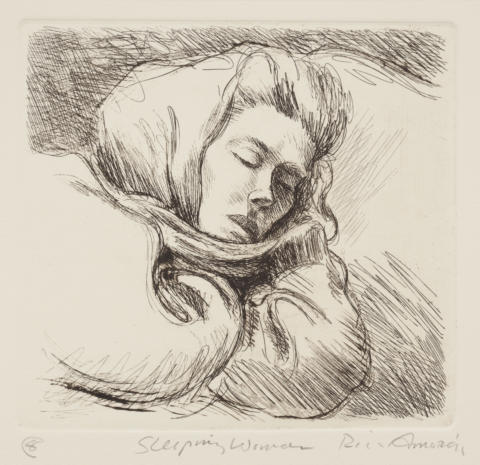 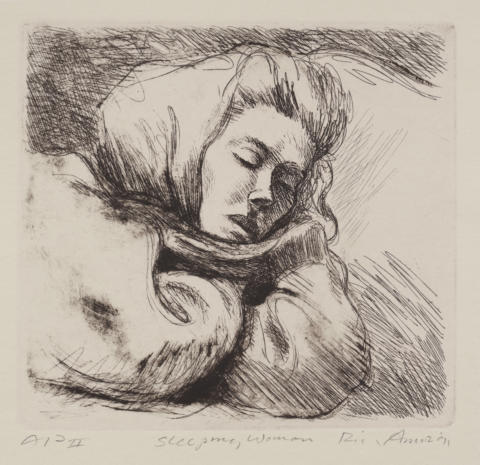 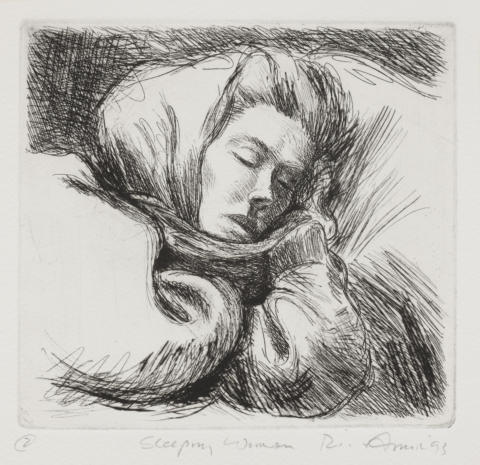 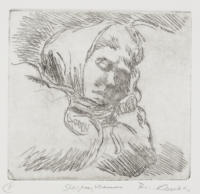 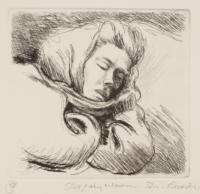 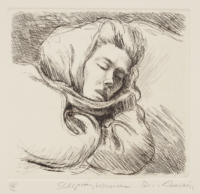 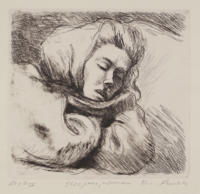 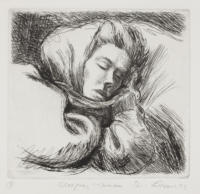 Soft-ground etching. The head and shoulders of a sleeping woman; she faces right, her head resting on a large pillow. She wears a thick sweater and has a scarf around her head, and she sleeps with one arm tucked under her chin, the other under her head.

Drypoint accents have been added to the folds in the sweater, to the facial contour on the right side, and to the lower area of the background at left.

Most of the drypoint accents added in the previous state have been burnished, with new ones introduced in the area of folds below the face.

Further diagonal drypoint hatching has been added at the junction of the sleeves. There are four variant impressions of this state, including a maculature.

Oblique drypoint strokes have been added in the upper left background; curved lines appear at the elbow of the right arm, and elsewhere on the right sleeve.

Description of Featured Image
The head and shoulders of a sleeping woman; she faces right, her head resting on a large pillow. She wears a thick sweater and has a scarf around her head, and she sleeps with one of her arms tucked under her chin, the other under her head. Although inscribed ‘2’, this is actually the eleventh state of this print.
Where Made
Dunmoochin, Cottles Bridge
Medium Category and Technique
Intaglio Print: Soft-ground etching, line etching, open-bite etching and drypoint on copper
Support
Wove paper. Identified papers: White Fabriano paper with watermark: ‘CMF’ with star above, within a circle/oval; cream BFK Rives paper with watermark: ‘BFK RIVES / FRANCE’ with infinity symbol; buff BFK Rives paper with watermark: ‘BFK RIVES / FRANCE’ with infinity symbol; Arches paper with watermark: ‘ARCHES / FRANCE’ with infinity symbol.
Dimensions
Image size: 163 x 177 mm
Matrix size: 163 x 179 mm
Artist’s Record Number
RAE.42 (1991), RAE.80 (1993)
Printer(s) and Workshop(s)
All impressions printed by Rick Amor in his Dunmoochin studio, Cottles Bridge.
Summary Edition Information
Thirteen states. No edition.
Collections
State Library of Victoria, Melbourne: nine state impressions, numbered 1 through 9, all dated 1991; seven state impressions, numbered 1 through 7, all dated 1993; AP III, dated 1993.
National Gallery of Australia, Canberra: one state impression (maculature), on cream paper, numbered 1/1, dated 1991 (2007.692).
Comment

This etching is based closely on a pencil drawing in the 1991–92 sketchbook, in which Amor depicts his partner, the artist Meg Williams, asleep. In the drawing, dated 11 March 1991, Amor focused on capturing the sleeping pose and the details of the face, while leaving the background blank, and barely articulating the pillow. In the etching, in which the pose is reversed, he was concerned more with establishing mood through modelling and tone, while also giving close attention to the accurate rendering of the folds of the sweater and the complicated position of the arms.

In 1991, despite having persisted through nine states of the etching, and numerous refinements of tone, Amor was not prepared to print an edition. He resumed work on the plate two years later, in 1993. Once again, however, although he took E.046 through another four states and several variant printings, he decided against printing an edition.