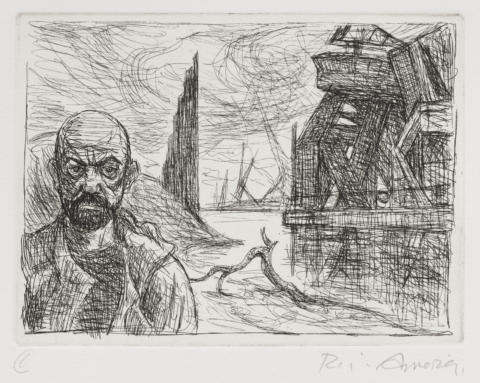 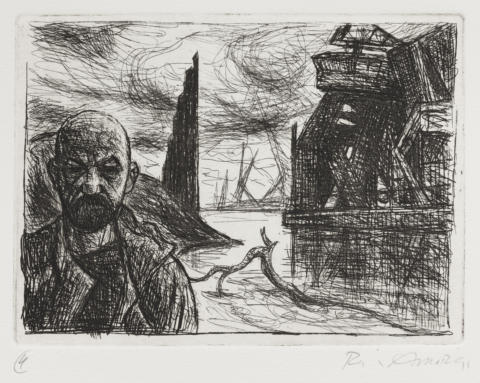 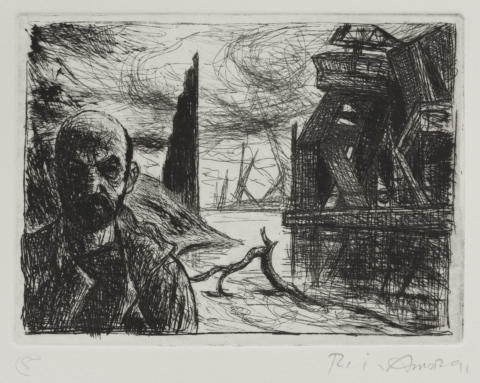 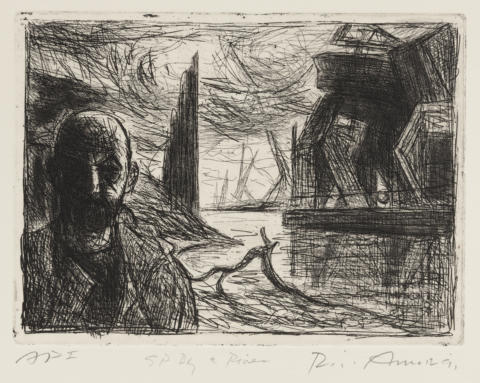 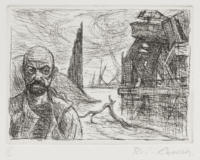 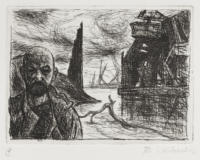 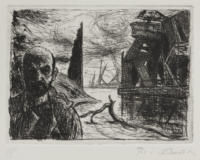 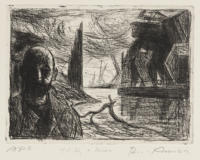 Etching. Amor portrays himself, from the chest up, in the left foreground of this composition. He stands on the bank of a river. There is a hooked tree branch in the water to the right of him, and a giant dredger on the bank at right. Behind the figure of Amor is a promontory and on it a retaining wall seen side-on; there are cranes in the distance. The sky is filled with clouds. The subject is etched lightly, in all its essential details. There are two variant impressions of this state.

More etched modelling has been added to the head and face, and the eyes now appear open but very dark. The clothes have been given more etched definition. The areas immediately to the left of the head and in the upper left corner have received more loose etching. The jutting promontory behind the figure appears to have been darkened with additional etching.

Drypoint accents have been added throughout the plate. There are two variant impressions of this state.

Areas of the plate have been burnished and new tone has been added with a roulette. The water around the branch has been covered with additional loosely etched lines, and new etched curves can be seen in the clouds.

Catalogue Number
E.045
Title and Date
Self portrait by the river 1991
Description of Featured Image
Amor portrays himself, from the chest up, in the left foreground of this composition. He stands on the bank of a river. A tree branch is prominent in the water to the right, and there is a giant dredger on the bank at right. Behind the figure of Amor is a tall retaining wall, seen in profile, and in the distance are cranes. The sky is filled with clouds.
Where Made
Dunmoochin, Cottles Bridge
Medium Category and Technique
Intaglio Print: Etching, drypoint and roulette on copper
Support
Wove paper. Identified papers: Arches paper with watermark: ‘ARCHES / FRANCE’ with infinity symbol. According to Amor’s records he also used grey BFK Rives paper and cream BFK Rives paper.
Dimensions
Image size: 149 x 205 mm
Matrix size: 148 x 205 mm
Artist’s Record Number
RAE.41
Printer(s) and Workshop(s)
All impressions printed by Rick Amor in his Dunmoochin studio, Cottles Bridge.
Summary Edition Information
Nine states. No edition.
Literature
For an illustration of the painting Self portrait at the edge of the city, 1989, see Gary Catalano, The Solitary Watcher: Rick Amor and His Art, Melbourne University Press, Carlton South, Victoria, 2001, p. [134].
Collections
State Library of Victoria, Melbourne: eleven state impressions, numbered 1 through 6, 6A, 7 through 10.
Comment

The self portrait in this etching has been transposed from its original garden setting in an earlier painting, Self portrait at the edge of the city, 1989 (Catalano 2001), to the mouth of the river Yarra around the docklands at Port Melbourne. This is a place that Amor knows well, having often depicted this stretch of the river in his paintings and prints. Indeed, it is one of the chief landscape locations in his art, especially during the 1990s, when he took boat trips to the area, either alone or with other artists, in order to work there. In E.045 he has incorporated his earlier self portrait into a view of the docklands that he first recorded in a pencil sketch, The mouth of the Yarra, drawn on the spot, in a sketchbook, on 3 August 1991.

In transferring the image of himself in his 1989 painting to this etching, Amor moved the figure so far into the corner and so close to the foreground as to omit one of the shoulders. As a result, his work through the nine states of the etching was focused largely on establishing a balance between foreground and background. Amor’s pull towards dark tone is also apparent here and culminates in his use of the roulette in the final state.