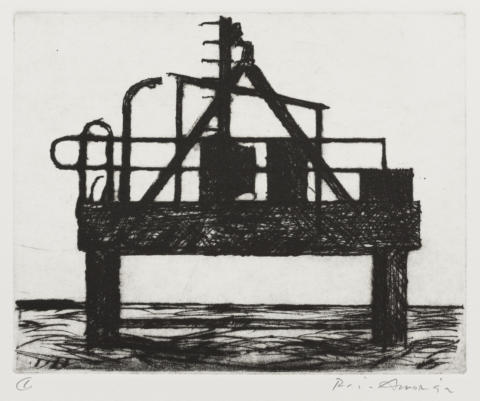 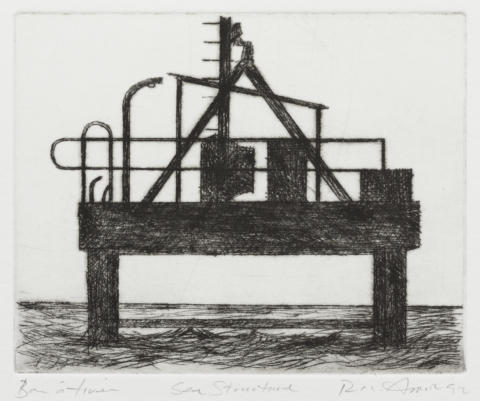 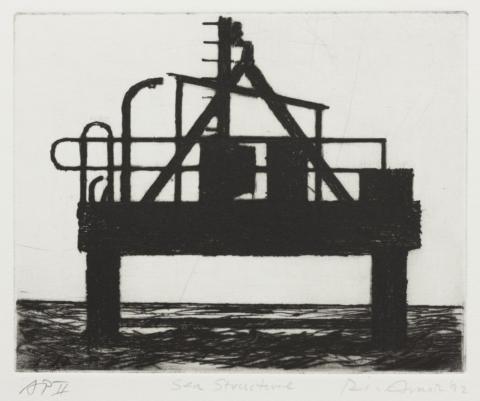 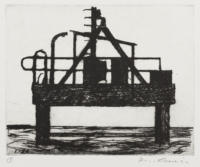 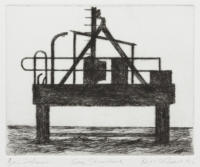 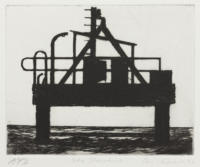 Drypoint. A railed platform stands in the sea, with the horizon visible in the far distance. On the platform are various navigational instruments. The sky is blank. The image is scored entirely in drypoint. There are three variant impressions of this state.

Still more waves have been added to the sea, and tonal shading with roulette has been introduced to the structure. There are three variant impressions of this state.

A drawing excursion down the Yarra River, taken by Amor and three of his artist friends on 20 February 1992, resulted in several drawings from which Amor later made prints; this drypoint is one of them. It is based on a quick, precisely dated pencil sketch of a structure that stood in the middle of the river at its mouth. It is difficult to identify the nature and purpose of this structure from the rough sketch, although Amor says that the function of the platform and its equipment was navigational. However, E.067 clearly shows that the artist was more interested in the geometric design of the structure than in describing its mechanisms. He depicts it standing in strict silhouette profile, looking like some kind of apparatus in outer space, but here firmly anchored in water.

There are two distinct versions of the image in this print, with these corresponding to the third and fourth states of the drypoint, and thus to the second and third editions, respectively. The first version shows the subject with a blank sky and relatively still water; in the second, the sky is filled with clouds, and the sea is choppy. While E.067 was taken through only four states, Amor printed many variant impressions, both within the states and within the three editions of the print – with each of these impressions being differently wiped, whether slightly or considerably.