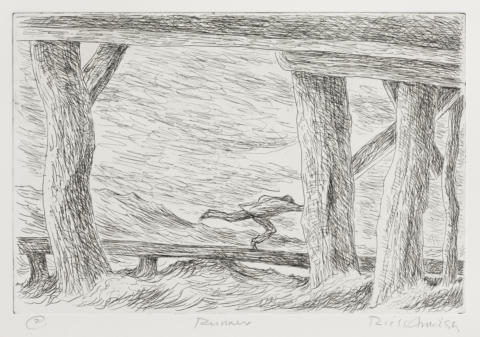 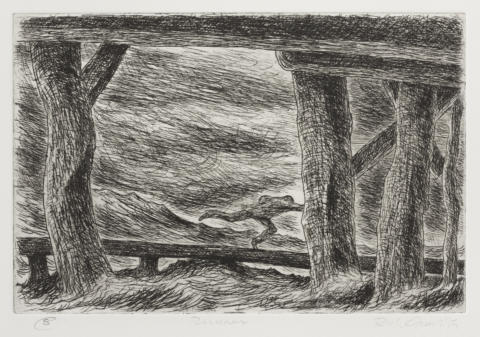 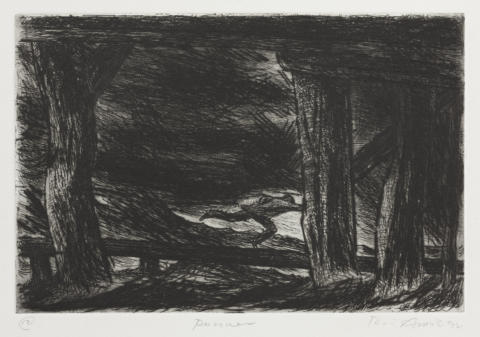 Cross-hatching has been added to the uppermost beam of wood, and elsewhere throughout the plate. There are two variant impressions of this state.

Outlines of billowing clouds, and oblique rays, have been added to the central area of sky, and much of the sky has been covered with etched strokes. The sky now merges with the sea at the left edge of the image.

The plate has been reworked. The sky has been further darkened with prominent drypoint cross-hatching, which is not integrated into the image but stands out as a graphic device. In his intaglio record book, Amor indicates that he printed two artist’s proofs of this state, and that they were inscribed ‘AP I’ and ‘AP II’ respectively. These impressions have not been located.

The plate has been reworked for a final time. Some of the drypoint added to the sky, and elsewhere, in the ninth state has been burnished. In the sky, the effect of the burnishing has been the creation of three distinct layers of dark cloud. There are two variant impressions of this state.

Description of Featured Image
Surrounded by a stormy sea and against the backdrop of a dark, angry sky, a man is depicted running to the right along a low-lying pier. In the foreground, and framing the scene in a square arch, is another, taller wooden pier, supported by three large posts and by smaller beams.
Where Made
Dunmoochin, Cottles Bridge
Medium Category and Technique
Intaglio Print: Etching, drypoint and burnishing on copper
Support
Wove paper. Identified papers: Fabriano paper with watermark: ‘CMF’ with star above, within a circle/oval.
Dimensions
Image size: 200 x 301 mm
Matrix size: 203 x 303 mm
Artist’s Record Number
RAE.9 (1989, 1991, 1992)
Printer(s) and Workshop(s)
All impressions printed by Rick Amor in his Dunmoochin studio, Cottles Bridge.
Summary Edition Information
Ten states. No edition.
Literature

This drypoint is one of a group of similar images made, or begun, in the 1980s. Among the intaglios, E.013 was preceded by the etching Runner (small plate), 1988 (cat. no. E.004), although there the subject is oriented in the reverse direction and the depiction is purely linear. E.013 is closest in size to the 1984 woodcut Runner, in which the motif of the running man and the sea appeared for the first time in Amor’s art (Catalano 2001). However, while the dimensions of the woodcut and those of this work are roughly comparable, the scale within the two compositions differs; here the figure is smaller, is seen from a greater distance, and appears to be more overwhelmed by the elements.

The drypoint progressed through ten states, with Amor incrementally darkening the tone, and thereby the work’s emotional reverberations. A late catalyst for this development was the emotionally turbulent, mural-sized charcoal image of the runner that Amor made in 1990 as part of an installation for the Australian Centre for Contemporary Art (ACCA), commissioned by ACCA’s then director, Grazia Gunn, for a series of exhibitions titled The ACCA Wallpapers.

The hand-colouring of an artist’s proof of the final state, reproduced here as the Featured Image, corresponds, generally, to the colours in Amor’s 1988 oil painting of the runner subject (Lindsay 2005), although the watercolour wash is transparent and thus less intense.

For further discussion of the theme of the runner in Amor’s art, see Comment in entry for cat. no. E.004.