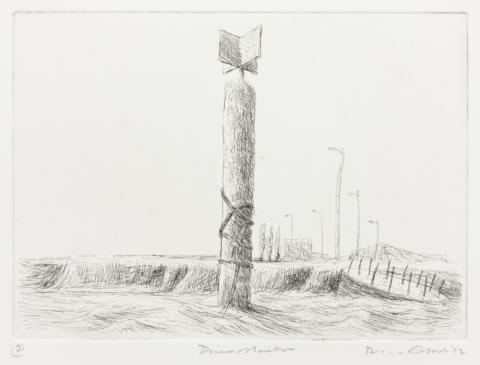 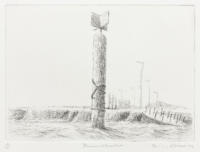 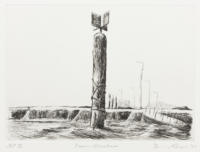 Etching has been added to many areas, and especially to the river marker, to better define volume and space.

Extensive new work has been done in drypoint. There are two variant impressions of this state.

The subject of E.065 is related to that in a rough pencil drawing that Amor made in a sketchbook during an excursion by boat down the Yarra River on 20 February 1992, in the company of three fellow artists: David Larwill (1956–2011), Mike Nicholls (b. 1960) and James Smeaton (b. 1964). Amor used his sketch as a model for two watercolours, as well as for the oil painting River marker, 1992–2001 (Castlemaine Art Museum). The present etching was made after the painting, but, in addition to reversing its orientation, differs from it in a number of details.

The principal change was made to the river marker, which, in the print, no longer leans as conspicuously to one side. Further, five tall light poles have been introduced to serve as a visual link between the prominent foreground and the distant view of factories on the horizon.

The progression of changes in the first four states of the etching was concerned chiefly with subtle adjustments to the details and tonal modelling of the marker. The major change came with the introduction of drypoint in the fifth and final state. However, while the drypoint imposed a clarity on the subject, it did not resolve its spacial aspects.

Although Amor’s intaglio record books indicate that he had planned to produce an edition of ten impressions, this never eventuated.