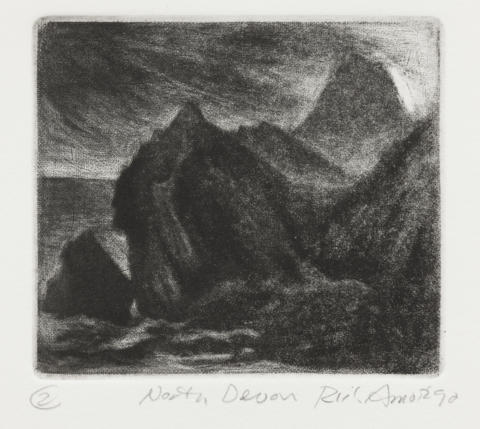 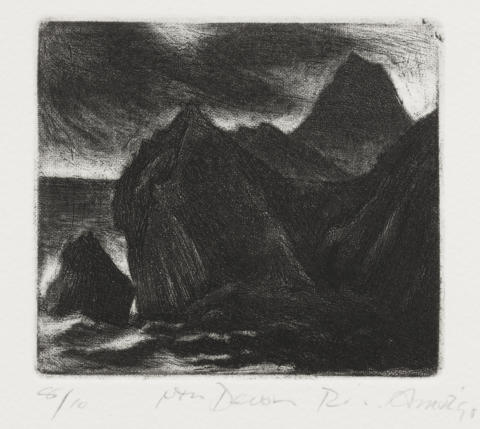 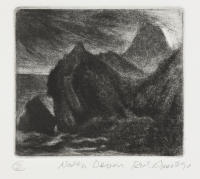 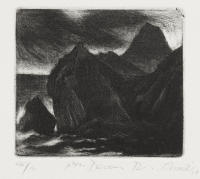 The subject has been modelled volumetrically with the burnisher, and the details of the coastal waves at the lower left have been made more distinct.

The rocks have been burnished in various places so as to more accurately depict their irregular morphology and to provide the image with greater tonal differentiation.

The subject here is the rocky promontory of Hartland Quay in North Devon, on the Atlantic coast of England. Due to their geological formation, the cliffs in the area have spectacular folds, which, over time, have created a dramatic landscape. Amor visited North Devon – the land of his forebears – in 1989, and while there he worked outdoors, painting with watercolours and drawing.

Related to E.024 is a watercolour of the cliffs at Hartland Quay in the artist’s 1989–91 sketchbook; this work is dated 16 September 1989. However, the print is based on an oil painting that was done after the watercolour.

This is Amor’s first mezzotint, a technique he chose because it seemed to him that it suited the subject matter. He did not use a mezzotint rocker to prepare the plate, but instead relied on his father’s roulette wheel. (Amor has pointed out, however, that his father only ever made relief prints.) The addition of etching in the third state of E.024 indicates that the artist had some difficulties in controlling tonal differentiation in the image, and in obtaining the required intensity of blackness – not surprising, for his first attempt at a mezzotint. Despite this, the edge of roughness in the plate is in perfect keeping with the ruggedness of the subject.

The impressions in the edition of this work are not uniformly printed. This is due partly to Amor’s lack of experience in printing mezzotints, and partly also to his inherently experimental attitude to printing editions.

On the verso of the copper plate used for E.024 is an etching depicting a female nude reclining on pillows or a sofa; this image was never printed and has been cancelled with a large cross.