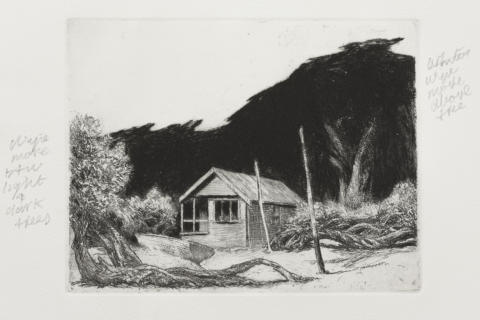 Etching. A small seaside house with a tripartite front window, and a porch on the left, is set in the midst of ti-tree, with a cypress hedge in the background and a tall cypress tree behind it on the right. In the foreground to the right of the house are two telegraph poles, and in front of it, on a grassy bank, is an abandoned dinghy. At the lower left is a twisted ti-tree and there is another ti-tree to the right of the house. The subject is lightly etched. There are two variant impressions of this state.

Much new etching has been added throughout the plate, resulting in greater overall tonal differentiation. The cypress hedge, glimpsed between the branches of the gnarled ti-tree, now forms a dark background and extends to the far left of the plate, but is interrupted in the centre by the peaked roof of the house. The side window of the house now has two panes instead of one, as in the first state. There are five variant impressions of this state.

Impression II.e is extensively touched with pen and indian ink over traces of pencil. The drawing is located around the area of the background hedge and over the canopy of the tall cypress.

A drypoint accent has been added to the inner right contour of the ti-tree at the lower right.

The additions drawn in pen and ink on impression II.e have been implemented in this state. Drypoint scoring fills in an expanded area of dense hedge behind the house and encompasses the tall cypress in a huge wave of blackness. Drypoint lines accentuate outlines of the house and provide a tonal balance to the major change.

More drypoint accents have been added to the house. There are now deep shadows on the eaves at left, below the gable, on the porch and on the tripartite window. The window panes and the porch are now darker, as is the vegetation seen through the porch. There are three variant impressions of this state.

Catalogue Number
E.160
Title and Date
House by the sea

Description of Featured Image
A small seaside house with a tripartite window, and a porch on the left, is set in the midst of ti-tree, with a huge hedge of cypresses in the background. In the foreground, to the right of the house, are two telegraph poles, and in front of it, on a grassy bank, is a dinghy. At the lower left is a twisted ti-tree. This is an impression from the second edition of the etching, after major changes were made to the background hedge.
Where Made
Alphington, Melbourne
Medium Category and Technique
Intaglio Print: Etching and drypoint on copper
Support
Wove paper. Identified papers: BFK Rives paper with watermark: ‘BFK RIVES / FRANCE’ with infinity symbol; Velin Arches paper with watermark: ‘ARCHES / FRANCE’ with infinity symbol.
Dimensions
Image size: 158 x 200 mm
Matrix size: 160 x 205 mm
Artist’s Record Number
RAE.191 (2010), RAE.198 (2011)
Printer(s) and Workshop(s)
States I through IV printed by Rick Amor in his Alphington studio. First edition printed by Rosalind Atkins at Kate Herd’s studio, Alphington. State V printed by Amor in the Alphington studio. State VI printed by Amor in the Alphington studio (VI.a and VI.b) and by Rosalind Atkins at Kate Herd’s studio (VI.c). Second edition printed by Rosalind Atkins at Kate Herd’s studio.
Summary Edition Information
Six states. Two editions. First edition: edition of ten numbered impressions, 2010. Second edition: edition of ten numbered impressions, 2011.
Exhibitions
Art Gallery of South Australia 2016–17: Art Gallery of South Australia, Adelaide, Rick Amor: Contemporary Romantic, 2 December 2016 – 30 April 2017 [no catalogue], ed. 5/10, 2010, and ed. 6/10, 2011.
Literature
For an illustration of the painting House by the sea, 2011, see Philip Bacon Galleries, Rick Amor (exh. cat.), Philip Bacon Galleries, Brisbane, 2014, p. 7, cat. no. 4.
Collections
State Library of Victoria, Melbourne: nine state impressions, numbered 1-1 through 1-6, 2-3, 2-4, 3-3, all dated 2010; ed. 4/10, dated 2010; three state impressions, numbered 1-1, 1-2, 2-2, all dated 2011; one undesignated proof with annotations, dated 2011; ed. 3/10, dated 2011.
Art Gallery of South Australia, Adelaide: ed. 5/10, dated 2010 (promised gift); ed. 6/10, dated 2011 (promised gift).
Comment

The subject of this print does not represent an actual view but is an expression of Amor’s memories of the Mornington Peninsula before it became a region of – in his words – ‘vineyards, villages and craft shops’. It is the dark place of his memory: a landscape of emotion. The scene depicted is in fact based on views of Port Fairy, a township on the south-west coast of Victoria, far from Amor’s childhood home at Frankston. It was at Port Fairy that the artist photographed the trees, and painted the watercolour, that he used in composing this etching.

The first four states of the etching progressed in a relatively straightforward way towards the first edition, of 2010. However, from the beginning it was apparent that the scene depicted was a forsaken landscape: there is no sign of human presence, and the small boat, abandoned on a grassy bank, stands in front of an uninhabited house.

The idea for the great change to the background that was implemented in the penultimate state came early, with Amor making hand-drawn additions to the second state (2010). However, the amendments were not carried until 2011, after the printing of the first edition. In the fifth state of the print, the low hedge of trees in the background was transformed into a tall, irregular and all-encompassing hedge that looms like a dark tidal wave over the little house.