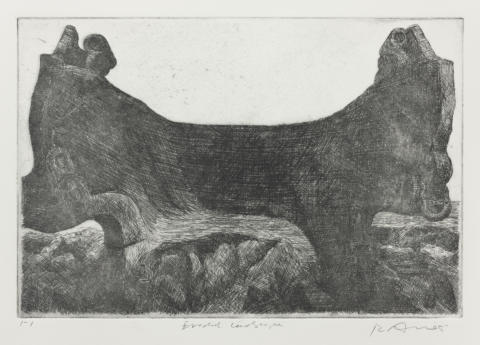 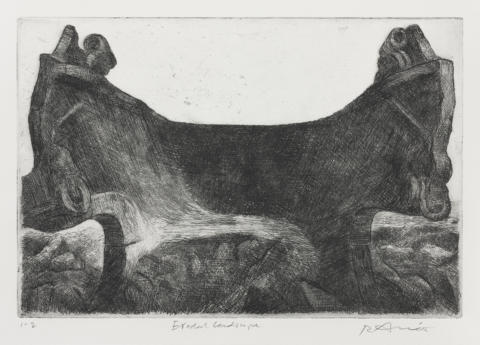 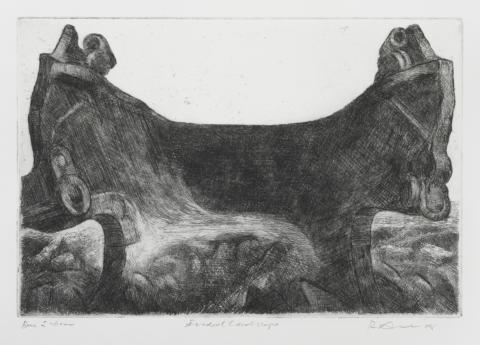 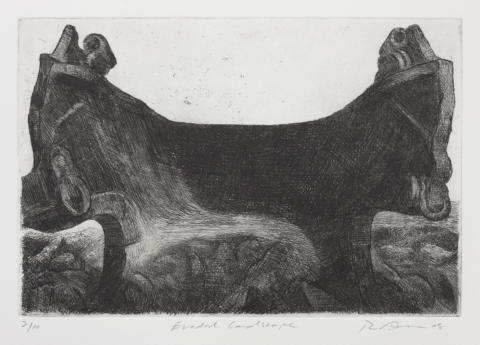 Etching. A giant mining scoop whose precise nature is difficult to determine, commands the space, blocking the view beyond. Below the scoop is stony rubble and in the right distance is a sliver of flat landscape. The subject is rendered with close cross-hatching, which has not printed clearly at the upper right and lower left, probably because the paper was too dry.

Much new etching has been added throughout so as to clarify the definition of the scoop and its details, and to model it spatially. To this end, the areas just below and just above the curved arm of the scoop at the lower left have been burnished.

More fine burnishing has been applied to the highlighted curve of the scoop at the lower left, and to the rocks at the lower centre.

The dominant motif in E.151 has its source in a newspaper photograph of a mining scoop, but the scoop is depicted here in a way that makes it unrecognizable. It looms like a giant ruin, or a surreal monument from a science fiction movie. According to Amor, in the original photograph there was a man standing in the scoop, but in the print there is no human presence, just a weird sense of vast scale, and of something perversely blocking the view beyond.

From its first state, the etching was closely hatched, and Amor had some difficulty in calibrating its tones with a burnisher, so as to imbue the object with the required spatial modelling. Nonetheless – or perhaps because of this – the work retains a disconcerting appearance that is in keeping with the artist’s love of creating strange things out of ordinary ones. The mining scoop, which causes erosion, has, in Amor’s depiction, been transformed into the eroded landscape itself.