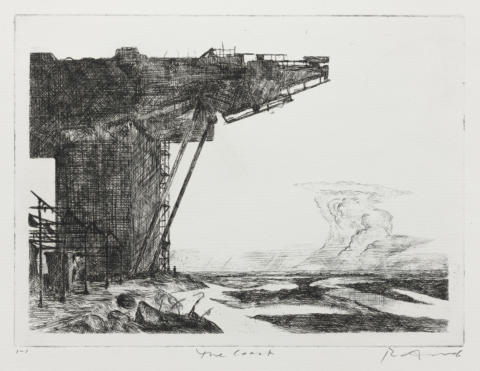 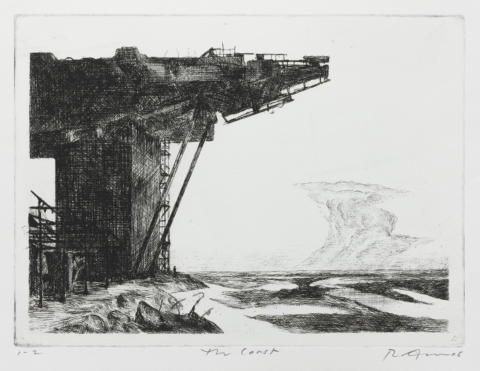 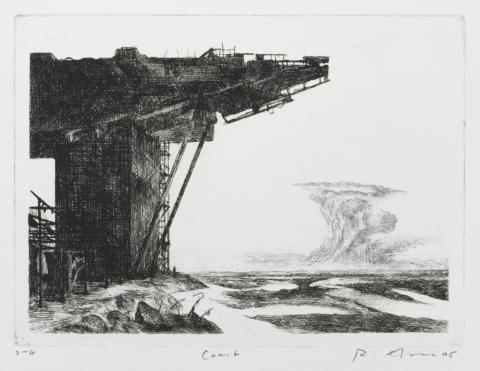 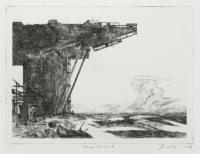 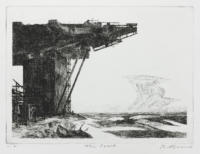 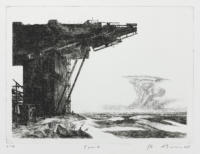 Etching. A giant T-shaped bridge span stands at a construction site, amid pools of standing water and with the sea beyond. Underneath the span stands a tiny figure. In the right distance rises a mushroom-topped natural cloud. The cross-hatching is comparatively broadly spaced.

Much etched hatching has been applied to the concrete structure to give it greater bulk and volume. Fine, loose etching has been introduced behind the framework construction at the far left. The topmost rock at the lower left has been burnished. There are two variant impressions of this state.

Additional etched lines now model the cloud, and oblique lines have been added to the sky at the horizon. The pool of water at the far right has added reflection lines and, in the upper central band of sea, the protruding earth among the pools of water has been modelled with etched hatching. There are three variant impressions of this state.

The giant, unfinished bridge span seen at the left in this print belongs to Melbourne’s Bolte Bridge as it appeared during its construction (1996–99). The bridge crosses the Yarra River near Melbourne’s CBD, but here it has been relocated to an anonymous shore and looks more like a ruin than a structure in progress. The mushroom-shaped cloud on the horizon is not a fantastic invention but a depiction of an unusual cloud formation that Amor saw during an evening walk on St Kilda beach, and that he quickly sketched on the back of an envelope.

The subject of E.135 was fully resolved in the first state but underwent considerable tonal refinements in the following two states.