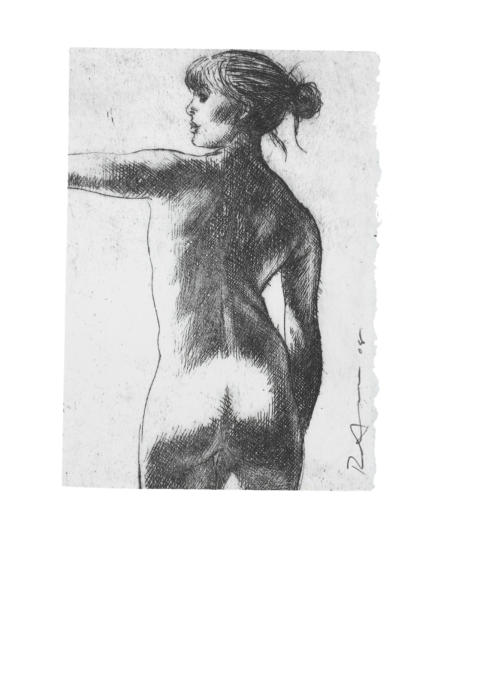 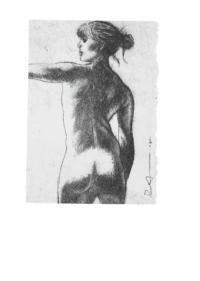 Etching and burnishing. A female life model viewed from the rear, her head in left profile and her hair in a bun. She stands with the left leg slightly bent at the knee, her left arm stretched out at shoulder height (and cut off at the elbow) and her right arm hanging down loosely. The body is modelled with cross-hatching, and with burnished highlights, which are evident on the lower back, under the right armpit and at the top of the right arm.

The contour of the fringe has been burnished in order to lessen its prominence. There are ten variant impressions of this state.

The hair at the top of the head has been raised slightly, with another contour added in drypoint. The area around the lower spine has been burnished and oblique hatching has been added to many areas of the body, in particular the lower buttocks, the left leg and the outstretched arm.

The contour of the fringe has been strengthened with drypoint.

This etching is based on a drawing from life of a model called Chelsea, whom Amor drew, in his Alphington studio, on 10 May 2005 (Liverpool Street Gallery 2007). Another drawing followed, and this second work was reduced, by squaring, for transfer to the copper plate. Amor also painted an oil based on the life drawing.

In addition to working directly for Amor, Chelsea worked as a life model at Montsalvat, an artists’ colony in the outer Melbourne suburb of Eltham, where Amor also drew and painted her. Chelsea’s solid and feminine build gave her a strong presence as a subject, and Amor thought highly of her for her understanding of what was required of an artist’s model.

Amor’s initial concern as he worked through the first four states of E.154, in 2008, was to focus on the details of the face and body and to model the flesh using a burnishing tool. In order to obtain the desired measure of sensuality, he also experimented with different papers and with plate tone, printing many variant proofs. Finally, just before the first edition was printed, he tried changing the figure’s relationship to the pictorial space, doing this by cutting an impression around its side and bottom edges.

In 2009 he cut down the plate itself, though not as radically as suggested by the trimmed sheet from 2008 (and without trimming the image). In 2011 he returned to the plate for a third time, to attend to the modelling of the body.