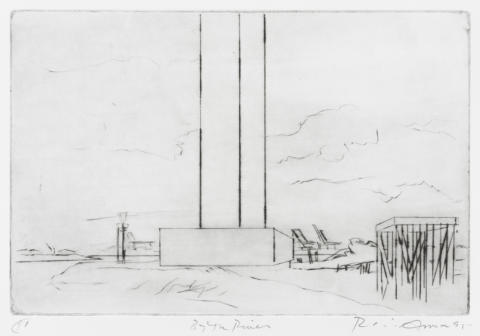 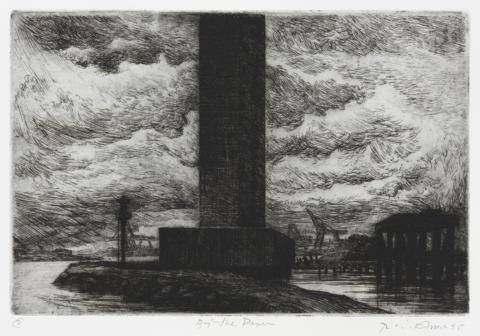 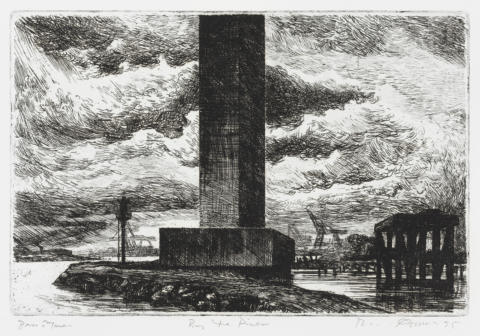 Drypoint. Positioned centrally, against a low horizon, is a massive, square pillar, and at the lower right is a square structure with a flat top. In the distance are cranes. Clouds are sketchily indicated in the sky. The main features of the composition have been summarily scored, in outline, with a drypoint needle. There are two variant impressions of this state.

The entire composition has been given substance with etching and drypoint. The sky is now filled with billowing clouds. The pillar has been modelled with dense cross-hatching, as has the structure at the lower right. The area on which the pillar stands is now clearly a flat promontory, surrounded by rocks. There are three variant impressions of this state.

The undersides of the clouds have been darkened with more etching, so that the sky is now stormier. The lines of reflection below the structure at right have been lengthened and made darker with horizontal scoring. Etched hatching has been added to the pillar, making its right face very dark. The upper part of the front face of the pillar, together with its base, has been darkened with more etching.

The subject of E.101 is based on an oil, also titled By the river, that Amor painted on site in 1995. The print is one of several etchings depicting the area around Yarraville, a Melbourne suburb near the mouth of the Yarra River. The giant pillar at the centre of the composition belongs to the West Gate Bridge.

The composition of the first state of the etching, while summarily rendered, contains all of the principal features of the image. These are fully developed in the following state, which is dominated by the central pillar and a cloud-filled sky. The extent to which the clouds appear threatening in the three variant impressions of the second state is dependent on the amount of plate tone present, and on the wiping. In the case of the cleanly wiped impression (II.c), it appears that the plate was wiped clean so that the artist could see clearly the work on it before making final changes. These changes were implemented in the third and final state (inscribed as the bon à tirer impression), when the clouds, and other parts of the image, were significantly darkened with etching.

The edition impressions vary greatly between cleanly wiped impressions and those printed with plate tone.